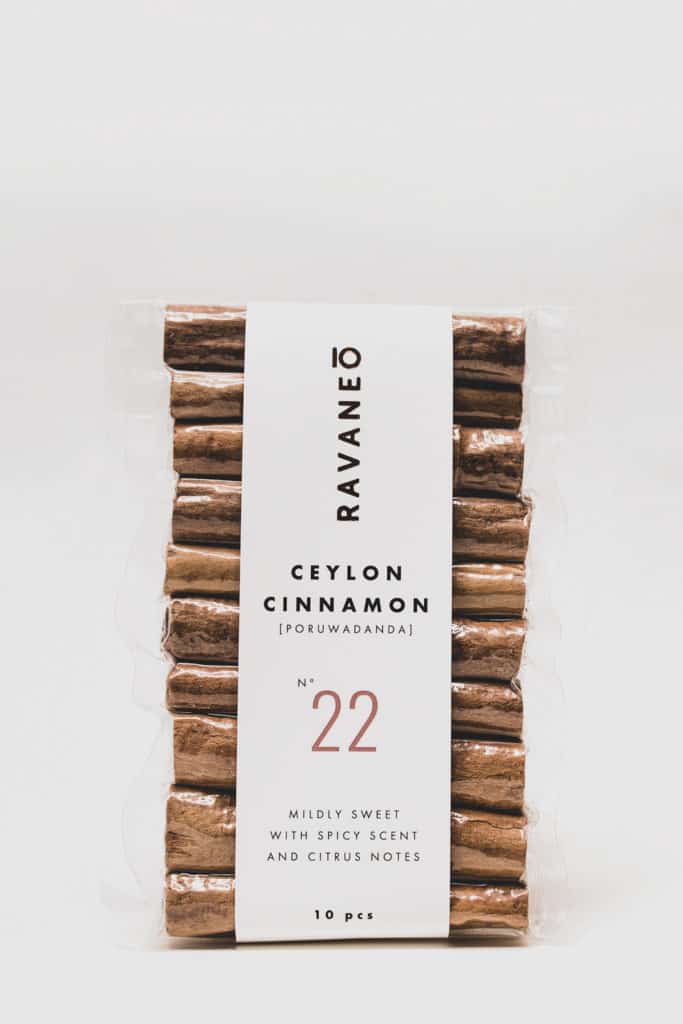 Now in a large convenient package of 10 pieces. Sufficient amount for your autumn baking and other food rituals. Autumn smells and tastes like cinnamon.

Ceylon cinnamon belongs amongst the most precious and gentlest of spices. It comes from Sri Lanka and was already valued in ancient Egypt for its unique flavour, aroma, and quality. It’s most commonly used when preparing meals and beverages, however, it has an established place in the worlds of aromatherapy, pharmaceutical, and cosmetics.

Use: For both sweet and savory dishes. Use the quills when making cinnamon tea, mulled wine, oatmeal, preserved fruit, and sauces. You can also easily grind the cinnamon in a manual or automatic coffee grinder at home. Ground cinnamon is ideal for baking sweet pastries, as well as making desserts, smoothies, and oriental soups.

From time immemorial, Ceylon cinnamon, also known as true cinnamon, has been grown and processed according to the precise traditional techniques in Sri Lanka (previously named Ceylon until 1972). When compared with the more widely-known and accessible Cassia cinnamon, Ceylon cinnamon is lighter in colour and more fragile, has a more delicious, sweet flavour, and a softer fragrance.

Ceylon cinnamon comes from the Ceylon cinnamon tree (Cinnamomum zeylanicum Blume). The cinnamon farmers take intense care of their plantations; they maintain the height of the trees at 3 metres and only harvest their cinnamon 4 years after they’ve been planted.

First, the outer part of the bark must be removed from the cinnamon tree, as only the thin inner layer may be used as a spice. The purified inner bark is cut into strips to be dried in the sun. After a few minutes, the strips begin to roll up on their own. The dried strips are then hand-folded by farmers into multilayered quills that are left for another 3 to 4 days to dry naturally. The challenging work of processing Ceylon cinnamon is performed by experienced farmers, who have cultivated their skills over many decades.

Only the highest-quality sections of the inner bark are rolled into quills of Ceylon cinnamon. The edges, as well as smaller and lower-quality pieces, are ground into a powder, or they’re sold as pieces of cinnamon bark. The Sri Lankans are duly proud of the quality of Ceylon cinnamon and its intertwined traditions. They are currently trying to receive a Protected Geographical Indication in the EU. The Pure Ceylon Cinnamon logo can already be found on the packaging, indicating that the product actually comes from Sri Lanka and that it lives up to the expectations.

We use cookies on our website to give you the most relevant experience by remembering your preferences and repeat visits. By clicking “Accept”, you consent to the use of all the cookies.
Cookie settingsACCEPT
Manage consent

This website uses cookies to improve your experience while you navigate through the website. Out of these, the cookies that are categorized as necessary are stored on your browser as they are essential for the working of basic functionalities of the website. We also use third-party cookies that help us analyze and understand how you use this website. These cookies will be stored in your browser only with your consent. You also have the option to opt-out of these cookies. But opting out of some of these cookies may affect your browsing experience.
Performance
Performance cookies are used to understand and analyze the key performance indexes of the website which helps in delivering a better user experience for the visitors.
Others
Other uncategorized cookies are those that are being analyzed and have not been classified into a category as yet.
Advertisement
Advertisement cookies are used to provide visitors with relevant ads and marketing campaigns. These cookies track visitors across websites and collect information to provide customized ads.
Analytics
Analytical cookies are used to understand how visitors interact with the website. These cookies help provide information on metrics the number of visitors, bounce rate, traffic source, etc.
Functional
Functional cookies help to perform certain functionalities like sharing the content of the website on social media platforms, collect feedbacks, and other third-party features.
Necessary
Necessary cookies are absolutely essential for the website to function properly. These cookies ensure basic functionalities and security features of the website, anonymously.
SAVE & ACCEPT
Powered by