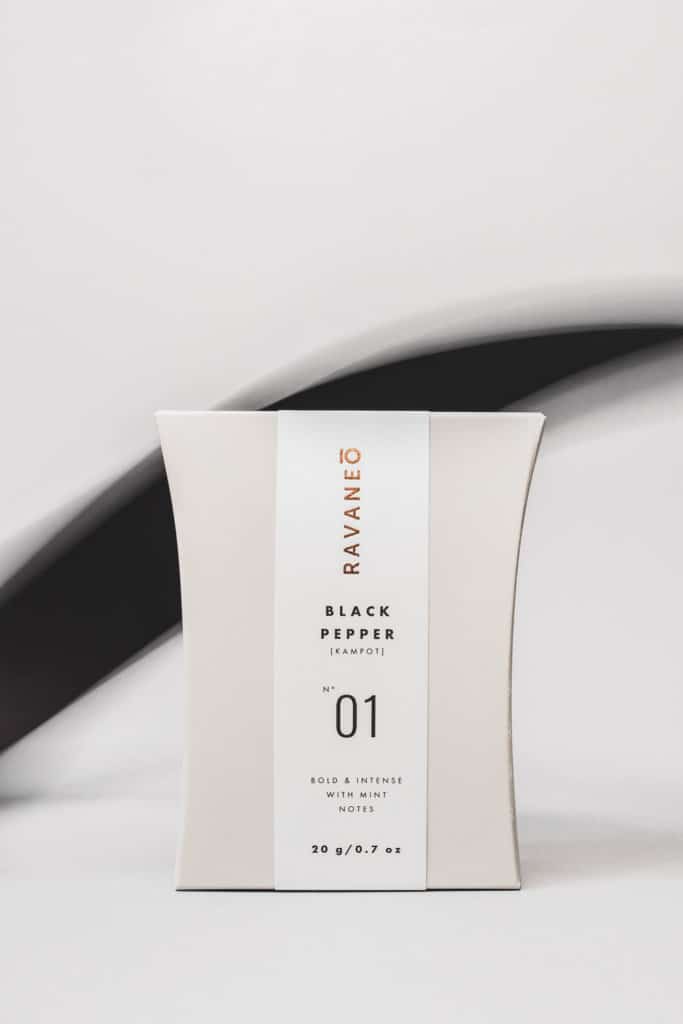 Thanks to its universality, the iconic Black Kampot Pepper (our NUMBER ONE) is an essential ingredient in every kitchen. It’s perfect for practically every kind of food, as it delicately unfolds, sharpening the flavours of your meals. Together with select sea salt, it creates an inherent basis on the dining table for everyday, high-quality seasoning.

Flavour profile: A pleasantly sharp taste with an intense aroma of pepper and hints of mint.

Use: Add the peppercorns to soups and sauces. Enjoy the pepper freshly ground on pasta as well as baked and grilled meat.

Pepper – the superfood and beloved spice – makes for an irreplaceable part of the Ravaneō portfolio. Kampot Pepper is the fruit of the green, creeping plants of two varieties of Piper nigrum – the Kamchay and the Lampong (or the Belantoeung), grown in the Kampot province in southern Cambodia.

The tradition of growing Kampot Pepper goes back to the 13th century. Its production, however, was halted by the Khmer Rouge regime, later to be reinstated again at the end of the 20th century. Today, growing and processing Kampot Pepper are founded on their original principles. The local farmers take extra care, using solely organic fertilisers and hand-held tools, when cultivating their fields, which they have lovingly named “pepper gardens”. Due to its extraordinary properties, Kampot Pepper bears a  Protected Geographical Indication (Kampot Pepper PGI).

Depending on when it’s collected and the processing method used, we can tell the difference between green, black, red, and white pepper. All these different colour types come from the same pepper plant. Black pepper is harvested as soon as the fruit begins to change colour from green to yellow. Next, it’s dried in the sun, which gives the pepper its typical dark colouring.

Our spices come from small farms. After they are collected and processed, they’re sorted under strict hygienic conditions and then vacuum sealed in transparent bags, thanks to which they retain all of their aroma, freshness, and premium quality. From the farmers straight to your table. Printed on each package of Ravaneō Kampot Pepper, you’ll find the tracking number code of the farmer who grew your pepper.